With a city rich in outdoor recreation, scenic mountains, hiking trails, parks and waterfront living, North Vancouver is truly a remarkable city for the outdoor enthusiast. But, the city is more than its epic landscapes, this scenic sister of Greater Vancouver has an abundance of lifestyle favorites that make this city a spectacular place to call home.

The City of North Vancouver is a waterfront municipality located on the north shore of Burrard Inlet and directly across from the City of Vancouver. Although it has significant industry of its own, including shipping, chemical production, and film production, the city is usually considered to be a suburb of it’s sister, Vancouver. 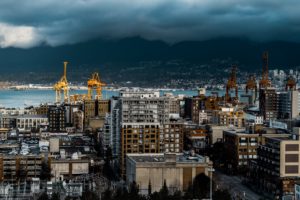 With a history rich in logging the Douglas Fir and easy access for exporting, North Vancouver became a hub of activity, subsequently establishing post offices, schools, and in time, the municipality of North Vancouver (which encompassed the entire North Shore from Deep Cove to Horseshoe Bay) was incorporated in 1891. The City of North Vancouver continued to grow around the foot of Lonsdale Avenue.  Itwas serviced by the North Vancouver Ferries and proved to be a popular area- commuters used the ferries to get to  work in Vancouver and eventually streets, city blocks and houses were slowly built around lower Lonsdale. Of course, the nearby mountains also proved to be a permanent attraction and ski areas were set up on Grouse Mountain and Mount Seymour.

Today the City of North Vancouver is densely populated with a number of residential high-rise buildings in the Central Lonsdale and Lower Lonsdale areas and is connected to Vancouver by two highway bridges (the Lions’ Gate Bridge and the Ironworkers Memorial Second Narrows Crossing) and by a passenger ferry, the SeaBus. The hub of the bus system is Lonsdale Quay– the location of the SeaBus terminal. Highway 1, part of the Trans-Canada Highway passes through the northern portion of the city, it’s a freeway for the entire length within the City of North Vancouver.

With neighborhoods as diverse as Greater Vancouver, The City of North Vancouver has a neighborhood for everyone. Stay tuned for each neighborhood feature and learn about the perfect place to call home, things to do, attractions and more.

Deep Cove – Deep Cove is a small local, waterfront-oriented village centre, at the eastern edge of the District of North Vancouver.

Delbrook / Upper Lonsdale – Nestled at the forest’s edge between Upper Capilano to the west, Lynn Valley to the east, and the City of North Vancouver to the south, the Delbrook /Upper Lonsdale community is a primarily residential area known for its stunning views of Vancouver, English Bay, the Lions Gate bridge and the North Shore mountains.

Lions Gate – Considered the western gateway into the District, and the first community you arrive in when you traverse the Lions Gate Bridge into North Vancouver, this area is home to several mature residential neighbourhoods, as well as the bustling commercial area along Marine Drive.

Lynn Creek- Perched near the Second Narrows Ironworkers’ Memorial Bridge gateway, and home to Seylynn, Bridgman, and InterRiver Parks, Lynn Creek is on its way to being reborn as a vibrant area in which to live, work, and play.

Lynn Valley – Home to some of our most visited recreational areas and celebrated for its mountain village charm, Lynn Valley is one of the District’s longest-established neighbourhoods.

Upper Capilano -Covering the slopes beneath Grouse Mountain, and defined by thick stands of mature evergreens in the ravines containing the Capilano River, and Mackay and Mosquito Creeks, Upper Capilano commands the northwest corner of the District.

With the ability to spend the morning skiing or boarding, and the afternoon enjoying a round of golf, or heading out for a mountain bike ride, there is no shortage of outdoor recreation or leisure to enjoy in this vibrant city. 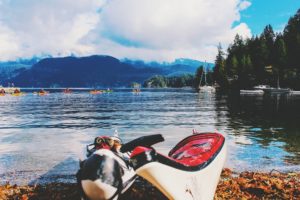 If you love water sports you’re in the right place, simply head downhill from anywhere and you’ll meet the ocean where the coves and islands on the coastline make for perfect paddling trips and even offer world class diving. All that vibrant Coast Mountain rainforest makes North and West Vancouver’s trails a mecca for all levels of hikers and mountain bikers. Need some inspiration?  Visit All Trails to plan your route.